Now, to mix things up how about something completely outlandish from an over-the-top 80’s tuner? Bram Corts from www.1000SEL.com shares the story about DP Motorsport’s modification of wide body Porsche 928s from his site that specializes in custom coachbuilders of the late 70’s to early 90’s…

Although the DP 935 conversion based on the Porsche 911 Turbo (930) was DP Motorsport’s best selling car, it was not the only spectacular Porsche conversion offered by the company from Overath. The Porsche 928, Porsche’s most exclusive top-end model in the 1980’s was also personalized by DP by means of a rather unsubtle, but very spectacular wide body kit. The DP Motorsport program for the Porsche 928 was introduced in 1984.

To put it simple: the DP Motorsport version of the Porsche 928 was wide, extremely wide: only 3mm from 2 meters, which was just enough to let it be passed as a car and not a truck. The wider body of the DP 928 consisted of all new bodywork including new front bumper with large air-intakes, much wider front wings, side skirts which lead up to the side streaked rear fenders which house the hugely wide rear wheels (16″ 285/40 VR15). All this new plastic left close to nothing remaining of the original Porsche’s bodywork, but did result in a weight reduction close to 300kg. DP Motorsport was keen on fitting modified Fuchs Porsche wheels with new extra wide rim body.

DP Motorsport has updated the Porsche 928 program over the years and there are some differences to be spotted within the existing bodyparts. First of all there are two different front bumpers, the early model has one large airintake accompanied by two smaller ones on either side, the later model has a single large opening with a horizontal divider. The very early model DP 928 didn’t have the pop-up headlights removed, the later ones did and had the pop-ups replaced with airintakes. Then there’s the rear of the car, which of course was altered by Porsche themselves with the introduction of the facelifted Porsche 928 in 1986 which had a completely new design of taillights. The rear bumper was also slightly altered by DP Motorsport, the early version having both the DP and Porsche logos engraved in the plastic, the later version just had the DP-logo engraved. Also, there’s air outlet on the later versions. Rims were usually the extra wide Fuchs wheels, but in the late 1980’s OZ Futura rims were also fitted.

Overall cost of the DP 928 conversion was 40.000 DM in 1984, which included the complete DP Motorsport bodykit, the special Fuchs wheels and new paintjob. Not included were a more sporty suspension which (in combination with the wider tires) significantly improved road handling of the Porsche 928. The supsension cost and extra 5.000 DM. Although there was 370 BHP engine modification available, the new design and plastic were the most interesting additions to the otherwise boring Porsche 928. Just look at the pictures… 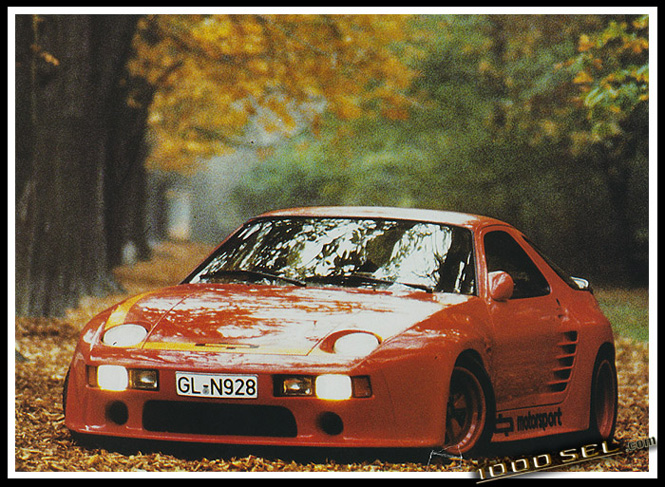 The GL-N928 seen from the side. From this side one could not expect the DP Motorsport Porsche 928 is really close to 2 meters wide. Clear to see are the very ’80s side streaks, streamlined wingmirrors and customized Fuchs rims.

The front bumper shows a similar design as the Porsche 911 Turbo based DP 935: one large gaping hole in the middle and two smaller ones on either side. The original headlights were retained in this early model. 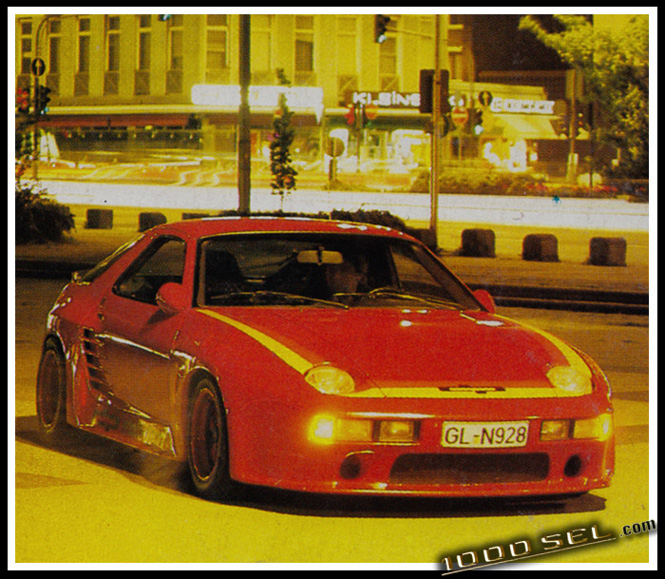 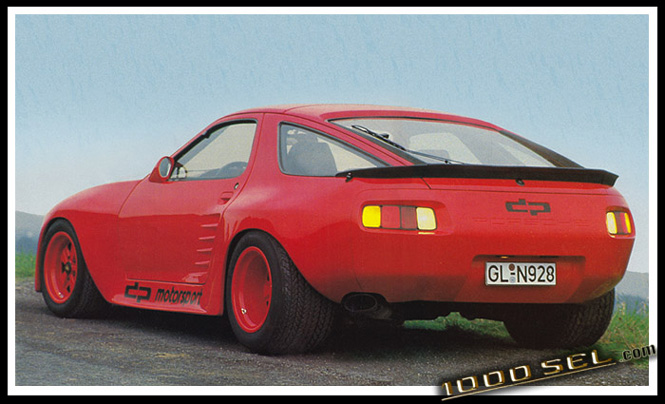 When looking at the rear end of the GL-N928 the “wideness” of the DP 928 becomes more obvious. This 1984 is a pre-facelift Porsche 928S, which still has the old type tailights. Also note that the DP-logo is engraved in the new plastic rear bumper. The new DP exhaust deliveres a mere 5 extra horsepower. John McEvoy, a car journalist, behind the wheel of the DP 928. 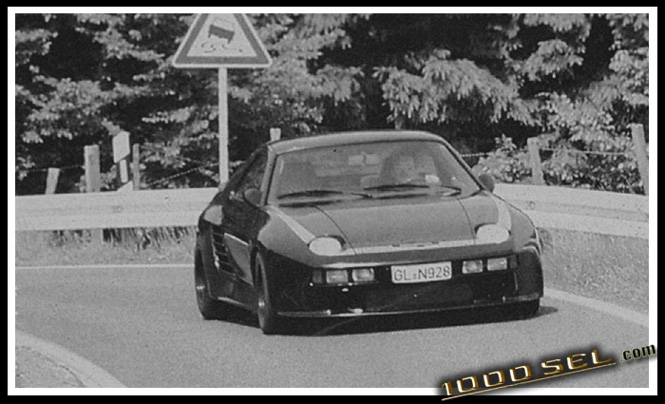 On these two DP 928’s DP Motorsport has dropped the original pop-up headlights and has replaced the space with airintakes. The red car, the “GL-N928” is the first DP 928 which apparently was updated in the proces and has, apart from the new bonnet, also received a differently coloured striping. Note that the red car has a clear glass cover over the headlights, something the black car doesn’t have. 1985: An interesting photo of an early DP 928 built in Sweden by the official Swedish representative of DP Motorsport, Josef Zirkelbach, right on photo. The man on the left is “Mr. DP-Motorsport” Ekkehard Zimmermann. 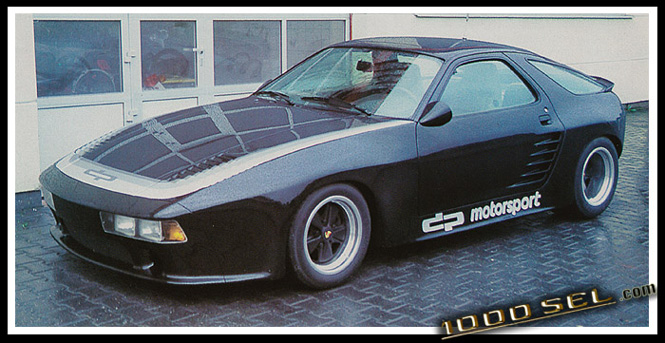 The same black car as in the above picture, still based on the pre-1986 Porsche 928S. In this photo it’s clear to see that the car has also been fitted with a cover over the headlights. 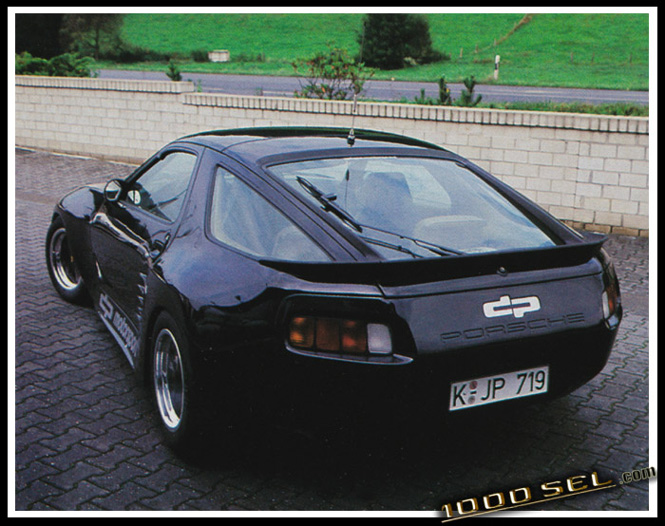 A later model DP 928, based on the Porsche 928 S4. This 928 has the new front bumper with altered airintakes, and special covers for the racey wheels. These wheels were more often seen on DP Motorsport’s 935 conversion. 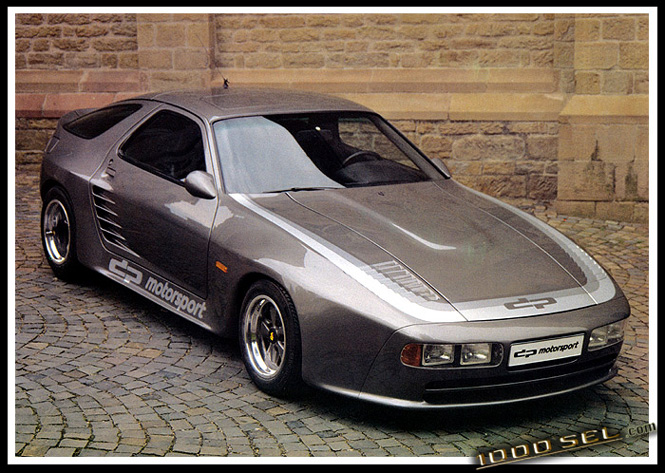 Two photos of a gray DP Motorsport 928. Also based on the 928 S4, it’s notworthy to look at the exhaust which is mounted straight to the back. Most DP 928’s had exhaust mounted more sideways, sometimes by means of a big single pipe or two smaller ones. 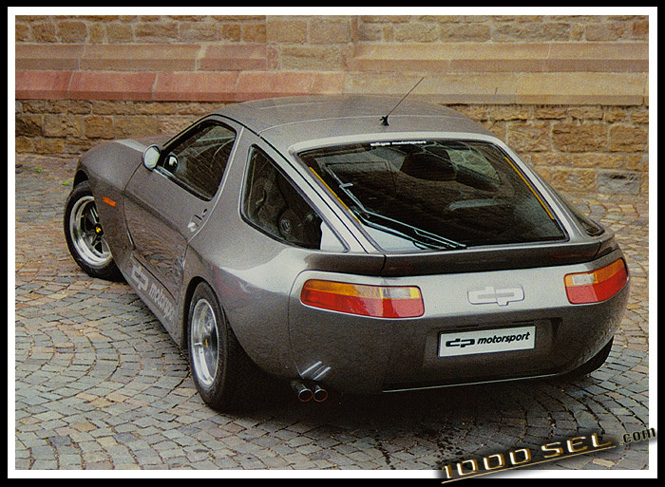 1987: Two photos of a DP 928 in a true 1980’s color: white. The picture of the front of the car gives a clear view of the front bumper with the large horizontal inlet and a smaller one just below the license plate.

A true 1980’s pimp mobile this DP 928 with white leather, even rims painted in white. The interior of this particular car was even fitted with a TV, something rarely seen in the more racingcar-like DP Motorsport Porsches.

1986: Also built by Josef Zirkelbach, this white DP 928 shows big similarities to the other white DP 928, even the striping is the same. It’s not the same car though, this one based on the pre-facelifted Porsche 928 with different fron bumper and having partly polished rims are details that set it apart. 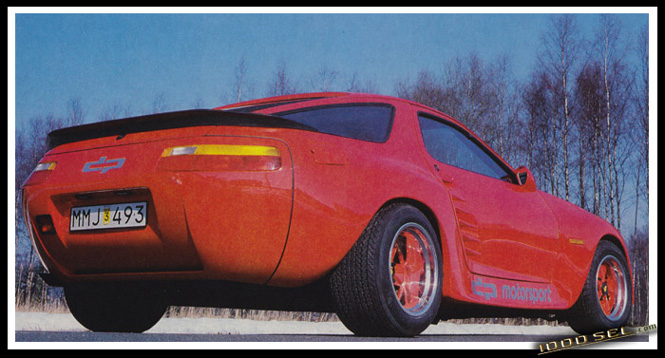 Josef Zirkelbach at work in his Hässleholm, Sweden based shop, working on one of the early DP 928’s in 1985. Rear-view of the same DP 928 under construction (the LJE 872 also in the photo with Ekkehard and Zirkelbach). Note the large gap between the taillights, meant for a Porsche 911-type reflector, a feature not standard for the DP 928, only seen on this car. Also note how wide the conversion is, compared to where the stock rear wheels are. A DP 928 under construction in the DP Motorsport workshop in Overath, Germany. This picture, also taken in Overath, shows clearly how many new parts were involved to create the DP 928.